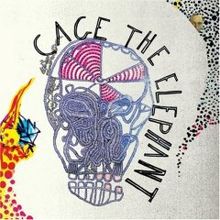 Cage the Elephant is the debut album by the American rock band Cage the Elephant. The album was produced by Jay Joyce and released on 23 June 2008 in Europe via Relentless Records, and on 24 March 2009 in the United States via RCA/Jive Label Group. The album has been certified gold by the RIAA on 5 June 2012 which means it has sold over 500,000 units in the US alone.