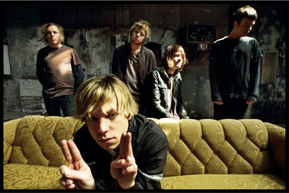 Cage the Elephant is an American rock band from Bowling Green, Kentucky, that formed in 2006. The band’s first album, Cage the Elephant, was released in 2008 to much success, spawning several successful radio singles and gained the band a large following in both the United States and the United Kingdom. Cage the Elephant are known for high octane live performances and for possessing an eclectic sound. The band’s first album is influenced by classic rock, funk, and blues music. However, the band’s sophomore album, Thank You, Happy Birthday, displayed heavy influence by punk rock and bands such as the Pixies.

Members of Cage the Elephant had previously been involved in the band Perfect Confusion. The band signed with Relentless Records after showcasing at the 2007 South by Southwest music festival, and then moved to London, England. They released their eponymous debut album, Cage the Elephant, on June 23, 2008 in the UK and April 21, 2009 in the US/Japan/Australia/Canada. The album obtained mostly favorable reviews. Their single “Ain’t No Rest for the Wicked” reached number 32 on the UK Singles Chart and was featured in the Gearbox Software video game Borderlands.

Cage the Elephant appeared as a support act on tour with The Pigeon Detectives in early 2008 and with Silversun Pickups and Manchester Orchestra in 2009. The single “Ain’t No Rest for the Wicked” was the free single of the week on iTunes for the week of April 12, 2009. The group made a national TV appearance on the Late Show with David Letterman, performing “Ain’t No Rest for the Wicked”, in July 2009. In August 2007, Cage the Elephant played for the first time at Lollapalooza in Chicago, and returned to the festival in August 2009, as well as San Francisco’s Outside Lands Music and Arts Festival on August 30, 2009. Prior to their return to Lollapalooza the band also played at the music festival Bonnaroo twice, in June 2007 and 2009. “Ain’t No Rest for the Wicked” was played in the 2010 movie The Bounty Hunter, as well as the 2009 game “Borderlands”. They released the single “Back Against the Wall” on November 10, 2009. They supported many bands like Silversun Pickups, Manchester Orchestra, and Stone Temple Pilots on tour.

The band’s sophomore album, Thank You, Happy Birthday, was released in January 2011. Thank You, Happy Birthday was released to high critical acclaim. The album sold 39,000 copies during its first week in the U.S., debuting at Number 2 on the Billboard 200, losing to the band Cake’s Showroom of Compassion.[5] The album received much praise from critics.

Throughout the year, Cage the Elephant supported the album by playing live. The group landed multiple late night shows, such as the Late Show with David Letterman and The Tonight Show with Jay Leno. Cage the Elephant also landed the bill for the music festivals such as Coachella and the Glastonbury Festival. On August 6, 2011, Cage the Elephant performed at the Kansas Speedway for the first annual Kanrocksas music festival. In the later half of the year, the band supported the Foo Fighters, who were on tour supporting their new album Wasting Light. In October, drummer Jared Champion’s appendix suddenly burst, requiring immediate medical attention. Dave Grohl, the Foo Fighters’ frontman and former drummer of Nirvana, temporarily filled in for Champion while he was recuperating.

The band’s hit song “Shake Me Down” was nominated for a MTV Video Music Award for Best Rock Video in September 2011, but lost to “Walk” by the Foo Fighters.

The group’s audience expanded exponentially throughout 2011. Although they were formed in the late 2000s, the band earned the top spot in Rolling Stone’s “Reader’s Poll: The Best New Artist of 2011”. The band Sleeper Agent, another Bowling Green music group and close friends with Cage the Elephant, came in second place. The magazine also named Thank You, Happy Birthday as the 15th best album of the year. In 2011, Cage the Elephant and Manchester Orchestra embarked on a co-headlining tour with Sleeper Agent as the opening band.

In January 2012, the band released a live album titled Live from The Vic in Chicago, recorded during their 2011 tour and also toured with the Big Day Out music festival.

Cage the Elephant regrouped in the studio to record their third album in the first half of 2013. The band teased a new single, “Come A Little Closer” via their YouTube channel on August 1st, 2013. They also announced that the full single would be premiered on August 8th, 2013, and would later be released for purchase on iTunes on August 13th. According to an interview with Matt Shultz and iHeartRadio during Lollapalooza 2013 the title for their third studio album is Melophobia. The album is set for an October 8th release date. The band will embark on a tour opening for Muse in the fall. On August 24, 2013 the band performed the entire new album Live at Soundcheck Nashville, the songs were only performed in front of an intimate group of people such as friends and family members of the band.